Ponmocup Botnet – Why You Should Fear Zombie Networks 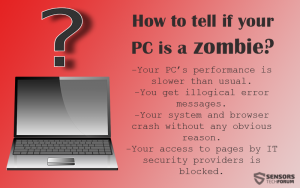 When a series of malicious attacks are taking place, be sure that botnets are involved. Botnets are one of the most dangerous cyber threats, compromising both network and home computers. As you probably know, a botnet is a group of compromised machines connected via the Internet and communicating with other machines. Illegal botnets can be used in various of malicious operations such as sending spam, performing DDoS attacks, etc.

Is your computer a zombie?

Zombie computers are nothing but ordinary machines situated in homes and offices spread around the globe. Any (unprotected) computer can become a part of a botnet. Attackers just need to sneak into the targeted system, usually through a backdoor and drop malware on it. Installing botnets typically happens via exploiting vulnerabilities in existing software. Sometimes social engineering (phishing, spear phishing) can also be included in the attack scenario. The worst part is that the owner of the compromised computer can stay unaware of the botnet activities for an undefined period.

How to tell if your PC has been turned into a zombie?

If the following actions keep on happening, your computer may be part of a botnet:

So, how many botnets are out there?

It’s difficult to shoot an exact number. However, security vendors periodically analyze compiled data. Some of the worst botnets we’ve seen active in the last couple of years are ZeroAccess, Conficker, Kraken, Simda, Asprox. Interestingly enough, Kaspersky Labs have concluded that approximately 70% of DDoS botnet victims are located in only ten countries. At least that’s what the statistics for Q2 of 2015 have shown. The two most targeted countries are the United States and China, which can be easily explained by the cheap hosting offered by them. Nonetheless, one thing is definite – no country is secure enough to evade DDoS attacks (even though, for some reasons, some territories are preferred over others).

Which is the most dangerous known botnet?

According to research by the Italian security firm FoxIT, Ponmocup or Poncocup Hunter is one of the oldest and most successful botnets which over time has infected 15 million computers and has made millions of dollars. Ponmocup is, however, often underestimated by AV vendors and thus, it hasn’t made the headlines as often as other botnets. Ponmocup’s peak was in 2011 when it took control over 2.4 million machines. In 2015, researchers believe that at least half a million systems are victimized by the botnet. Some experts refer to the botnet as to ‘a giant hiding in the shadows.’

Ponmocup was first discovered in 2006. Back then, it was known as Vundo and Virtumonde. It is both sophisticated and underestimated – a combination that has proven quite successful for its authors, currently focused on a pure financial gain.

FoxIT experts believe that the techniques employed by Ponmocup suggest that its authors have above-average knowledge of Windows and many years of experience in malicious software. The cyber criminals are suspected to be of Russian origin, based on the discovery that instructions for affiliates are written in Russian. Apparently Ponmocup wouldn’t infect countries from the Soviet States.

Researchers believe that the exact amount of money Ponmocup’s operators have made cannot be calculated precisely. What is known however is that their profits are close to the earnings of a multi-million-dollar business. Well, cybercrime has proven to be a rewarding field of employment, hasn’t it?

How to prevent your machine from becoming a zombie?

Having in mind that botnets are often deployed to spread malware across multiple machines simultaneously, having a powerful anti-malware solution appears to be a necessity.

To improve your security and avoid becoming a zombie, refer to the following security tips: